It’s a cold rainy day in Atlanta.  And I’m trying to visualize how someone walks out of a fiery explosion in the Middle East desert and survives. 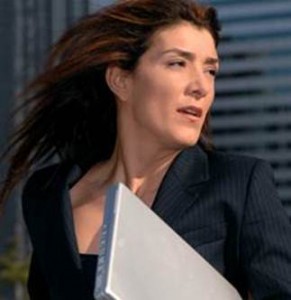 Today I am on the telephone with stunt woman Gaëlle Cohen, one of the most in-demand stunt performers in Hollywood.  She has worked on over sixty film and television productions including; Rush Hour 3, Babylon A.D., Brotherhood of the Wolf, most recently Zero Dark Thirty.

Born and raised in France, Gaëlle Cohen started out her career as a lawyer, “but I really didn’t fit in,” she tells me.

Maybe it was fate, one day she got a call from a friend who was a movie agent and asked her to fill in for an actress. “I arrived on set and saw other actors practicing fencing and since I was on the French National Fencing team and a champion fencer,  I helped them.  They liked my work and I met stunt performers who invited me to audition.”

Gaëlle launched a new career as a stunt performer for the Highlander show in 1995.

“I started out doing sword fights and performed all the bad girl stunts on the show.  It was like a flash –  this is what I want to do!

Cohen has a beautiful French accent and it takes me a few seconds to take in all that she is saying; “This is me – combining athleticism and artistic creation. I did extensive research and trained full time for a year and a half with the National Circus School, which included trapeze and trampoline training to marital arts to horse riding and other skills one would think to do as a stunt person.”

Gaëlle Cohen has been stunt performing ever since. “It was destiny for me.”

Former lawyer finds her destiny as a Hollywood stunt performer

Would you call yourself a daredevil? “No, not at all. Stunt people are not daredevils, we are extremely aware of security and safety.  We are not going after making historical records.”

What was it like working on Zero Dark Thirty and director Kathryn Bigelow?  “Zero Dark Thirty was one of the projects I was most proud of. One evening I received a phone call to work on a project but the details were top secret. Soon I was filming in Jordan and it was for a stunt explosion.  When I arrived on set, it was one of those bunkers where I met the director Kathryn Bigelow.  She was a strong yet very quiet person,  a powerful person. It was a great experience and I loved it.

What was the most fun stunt you ever performed? “Almost everything is fun. One day you are riding horses and the next day riding in a cop car chasing bad guys and another day I’m riding camels in the Moroccan desert.”

Have you ever dreamed of being in a James Bond movie or James Bond girl?  Cohen mentions stunt coordinator Gary Powell who has worked on several James Bond films including; SKYFALL, Casino Royale, Quantum of Solace.

“Gary Powell is a very good friend of mine and I would love to be a stunt woman in a James Bond movie. While most of my stunts are mainly performing for men, it would be great to be a bond girl and do my own stunts. Everything he does is great. Even if the movie is bad, the action scenes are great. Gary Powell is who I really look up to in my industry.”

Who was your favorite actress that you have performed stunts for? “Penelope Cruz and I would love to work with her again – she was a dream to work with in the movie, the Fan Fan.”  I press for details on what it’s like stunt performing for a famous celebrity.  “You are playing stunts for the celebrity dressed in costume.  But the audience doesn’t see the stunt person – you are constantly studying their movements to blend in and look like the actress.”

This industry is evolving, but it remains to be male dominated – what gives you the strength to persevere?

“There are a couple of things; first of my personality, I put my mind into what I am doing to achieve excellence. The second thing is, I’m from Europe and over there, stunt work is a family business that is dominated by male stuntmen. Some years ago, I was leading all the rehearsals and was coordinating all the stunts. I asked the guy in charge when are we going to start the stunts… and he yelled at me, ‘when I say we start.. I’m the stunt coordinator!’  I was taken aback and asked, when will we have a woman coordinator? He snapped, ‘a woman stunt coordinator, that will happen when pigs fly.'”

That was the day, it all changed for Cohen. Destiny would play her hand now.

“And that day, I thought oh really – there wasn’t any female stunt coordinators.  It’s just not fair. I have great relations with the directors and the actresses. Most actresses said they were more comfortable working with me and I thought this was an asset.  While I wasn’t planning at the time to become a stunt coordinator, I thought maybe this is the right time.”

An opportunity presented itself and Cohen would become the stunt coordinator for Tomb Raider video game.  “I put a show together for the opening of the new game. And then I got mean voice messages from a few stuntmen, ‘oh, you want to take our job, fine.  You’ll never work in this town again.'”

“Obviously I was bothering a few of the male performers.  So, it continues to be hard for a woman to take the role as a stunt coordinator.  Some people will push you away – or stop hiring – if you can’t work – you’ll have to stop your career as a stunt performer.  I love this work – it’s my destiny!”

One thing is for sure, Gaëlle Cohen isn’t leaving Hollywood anytime soon.  Her stunts have been receiving industry acclaim for their breathtaking craft and gritty realism.