Home/365 Days of Psychic Wit, Business Intuition, News/Hillary Clinton NOT the first woman to be nominated for US President
Previous Next

While a major historical moment for Hillary Clinton, she was not the first woman to be nominated for a major political party!

(MediaQuire) – Atlanta, GA – The year was 1872.  Women couldn’t even vote. Susan B. Anthony was leading the suffragette movement fighting for women to gain the right to vote.  Anthony surely was shocked when a gorgeous woman, years younger than her, Victoria C. Woodhull was nominated for President of the United States by the Equal Rights Party – at age of 32 years old.

If you spliced the genes of Hillary Clinton, Madonna, Heidi Fleiss and Margaret Thatcher, you might have someone like Victoria Woodhull. – Atlanta Journal & Constitution

Campaigning on a platform of “free love” and “equal rights” for men and women, she also advocated the legalization of prostitution. Woodhull was a clairvoyant who surrounded herself with intelligent men, often considered radical thinkers including; Stephen Pearl Andrews and General Benjamin Butler. 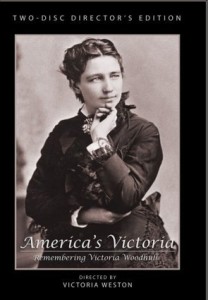 Woodhull burst onto the stage with America s most radical reformers, reoriented their movements, and was gone. People listened to her. A congressional committee reported on her interpretation of the Fourteenth and Fifteenth amendments. She was the first woman to run for president of the United States and the first presidential candidate to spend election day in jail. Harriet Beecher Stowe and Catherine Beecher used their cultural leverage to label her a tramp. Anthony Comstock declared war on her for distributing obscene materials. She almost brought an end to Henry Ward Beecher s career. America’s Victoria is a biography of this enigmatic figure in American history, the daughter of a swindling father and a spiritualist mother, who remade herself several times to become a Wall Street broker, a radical reformer, and, with her third husband, a British lady of the manor. The story is told by a narrator, several commentators, and readings from Woodhull s speeches and contemporary documents.

In  December 2016, Victoria lynn Weston teamed up with writer and producer Lorraine LoBianco to present the “America’s Victoria” documentary on a more 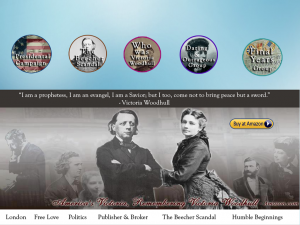 modern platform by creating an interactive educational iPad app that will provide key video clips featuring exclusive interviews with Gloria Steinem and respected historians.  “In doing so, we will be able to tell the story of not just Victoria Woodhull and her accomplishments, but help students understand how far women have come and inspire them to reach even higher to achieve their goals,” said Victoria lynn Weston. You can purchase the “America’s Victoria” app  on  on iTunes and Google Play.

Victoria lynn Weston is a respected intuitive psychic consultant, known as “the corporate psychic.”  She has produced a series of film documentaries whose works include; America’s Victoria, Remembering Victoria Woodhull ; featuring Gloria Steinem and Kate Capshaw. And, The Intuitive Factor; Genius or Chance; featuring Gary Zukav and parapsychologist Jeffrey Mishlove. As founder of Zoie Films Festival, Victoria utilized the latest streaming technology to launch the first online film festival showcasing films from around the globe. She’s also a developer and distributor of mobile apps.  Based in Atlanta, Georgia, Victoria has been a interviewed by dozens of media outlets including; Atlanta Journal & Constitution, Atlanta PARADE magazine,  ABC Talk Radio, CNBC, BUSINESS WEEK Online, Wired News and ABC’s NIGHTLINE.  Today, she is the Founder and President of AYRIAL, a new kind of “body, mind and spirit” community.

Lorraine LoBianco has been a longtime writer for Turner Classic Movies, as well as an executive at Fox Movie Channel and ION Television. She also has extensive experience developing mobile apps. In addition, she is the editor of the British Film Institute-nominated “Letter-Jean Renoir.”