The Intuitive Factor; Genius or Chance? 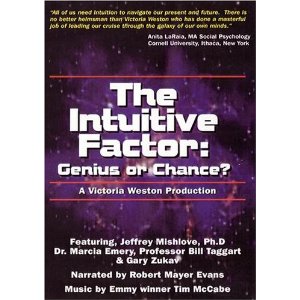 Producer / Director Victoria Weston interviews America’s experts on the inner workings of the mind including best selling author, Gary Zukav and parapsychologist Jeffrey Mishlove. Learn everything about intuition, how it works and why it’s important to listen to your “inner voice”.

Jeffrey Mishlove is one of the most brillant men who has studied the inner workings of intuition, psi and parapsychology. I’m very fortunate to have have met him, interviewed him and immediately became a member his INTUITION NETWORK. He’s contributed significantly to the world of psi. Just google his name and see his work in print. My favorite, ROOTS OF CONSCIOUSNESS – his college thesis. He’s hosted PBS THINKING ALLOWED for years. I believe you can order vhs or dvds of his past programs. Gary Zukav is equally impressive with his contribution to this documentary, and Marcia Emery. You can also hear their entire interviews on CD via INTUITION ONE ON ONE – this CD also includes a revealing interview with famous remote viewer, JOSEPH MCMONEAGLE, if you can ever see his work on TV, it’ll take your breath away. For now, enjoy the interview on CD and see why the US military awarded him the LEGION OF MERIT AWARD for remote viewing and his crucial findings about a Russian submarine headed toward the US.

The Intuitive Factor; Genius or Chance was broadcast on select PBS stations nationally.

Parapsychologist Jeffrey Mishlove hosted PBS’s THINKING ALLOWED for years and interviewed the best of the best in the world of intuition and psychic phenomena. It’s been a few years since the show has been aired, however, it was refreshing to see him in this DVD, THE INTUITIVE FACTOR. I found the program educational and enlightening. I highly recommended this program to anyone who is interested in the deeper meaning of intuition and how to develop it, trust it. Available on Amazon – THE INTUITIVE FACTOR; Genius or Chance?