My conversation with Jackie Collins about her new cookbook

Home/Blog, Interviews/My conversation with Jackie Collins about her new cookbook
Previous Next

My conversation with Jackie Collins about her new cookbook

There have been many imitators, but only Jackie Collins can tell you what really goes on in the fastest lane of all. From Beverly Hills bedrooms to a raunchy prowl along the streets of Hollywood; from glittering rock parties and concerts to stretch limos and the mansions of the power brokers — Jackie Collins chronicles the real truth from the inside looking out.

Jackie Collins has been called a “raunchy moralist” by the late director Louis Malle and “Hollywood’s own Marcel Proust” by Vanity Fair magazine. With over 500 million copies of her books sold in more than 40 countries, and with some twenty-eight New York Times bestsellers to her credit, Jackie Collins is one of the world’s top-selling novelists.

VICTORIA LYNN WESTON: First of all, congratulations on your new book; The Lucky Santangelo Cookbook.  You are an inspiration!  You are one of the few women to write 30 novels.  And Lucky is the heroine of seven of your novels, including Confessions of a Wild Child, Chances and Lucky.  She is the beautiful daughter of a former mob boss who has her own way of making offers people can’t refuse. One of Santangelo’s secret weapons is food and you give us a glimpse into her kitchen.  Jackie, you’re definitely not counting calories with Lucky’s delicious recipes.

JACKIE COLLINS:  No, definitely not.  I didn’t want to write a healthy cookbook,  I wanted to write about succulent food that is rich with butter and silky cream sauces.  I think if you’re going to indulge yourself, you may as well indulge, you know? The book is a full range of recipes with the kind of bold and audacious flavors that characterize Lucky herself;  Lucky’s Luscious Meatballs, Shrimp in Lemony Coconut Milk and Deviled Chicken Drumsticks.

VLW: I love to cook. And as a fan of any kind of lobster dish, the Rigatoni with Lobster Champagne Cream Sauce immediately got my attention.

JC: The Rigatoni with Lobster Champagne Cream is a deliciously rich dinner, and this is one of Lucky’s favorite dishes. She makes it just for Lennie when he’s home from a grueling location shoot and it’s just the two of them, alone together.

VLW: In The Lucky Santangelo Cookbook, you include beautiful color images of food and a variety of entertaining ideas for formal and casual entertaining.  I especially enjoyed how you included personal photographs and ideas for “creating the mood,” and tips on how to throw a party.

JC: I like to entertain formally and Lucky is someone who likes to entertain casually and loves impromptu dining.  So, there are recipes for last minute entertaining and suggestions for table setting.  When you host a party, always invite interesting guests and serve amazing food, keep the wine flowing and you’ve got a party!

VLW: Wolfgang Puck created the Jackie Collins cocktail for you. How was it working with the famed chef and entrepreneur?

JC: Wolf is the best! When he created the Jackie Collins cocktail, I was totally thrilled! And, so I hope everyone will enjoy the drink.

I am intuitive. I believe all women are naturally intuitive.  And Lucky is also very intuitive & listens to her inner voice.

VLW:  Many writers create characters that often reflect themselves, is Lucky Santangelo based on you?

JC:  Lucky is such an interesting character.  Women love her.  Women want to be her, because she is so strong and she can do and say anything – and she gets away with it.  When I wrote Confessions of a Wild Child,  I find I am a little like the teenage Lucky.  She runs away to the south of France and it’s all about; boys, sex and rock and roll.  I dropped out of high school and my parents sent me to Hollywood, where I began my research. (chuckles)

VLW: So, who would you cast for the adult Lucky in a feature film?

JC: Angelina Jolie.  She’s had an incredible life. She’s a very charismatic, sexual, adventurous woman who is not afraid to take risks.  And Lucky is sexual, bold and audacious and needs someone with that kind of energy to play her.

On FIFTY SHADES OF GREY

In Fifty Shades of Grey, the women get their asses kicked – in my novels, women kick ass!

The Jackie Collins, by Wolfgang Puck 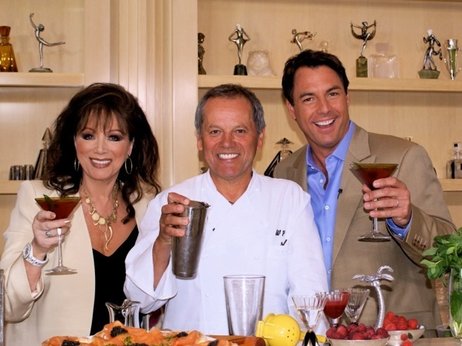 Muddle the raspberries with the simple syrup. Add the vodka and lemonade into a cocktail shaker. Squeeze the lime over the vodka mixture. Add the ice cubes, and shake the cocktail shaker hard for 30 seconds. Pour in the club soda, shake once, and strain into a highball glass. Garnish with a raspberry and a fresh mint leaf.

Victoria lynn Weston is a professional intuitive/psychic consultant and intuitive business coach.  She enjoys having conversations with interesting people where  she can discover how and why their intuition influences their creative and business decisions.  As a producer/writer, Victoria’s works include the PBS featured documentary, “America’s Victoria, Remembering Victoria Woodhull“ featuring Gloria Steinem and Kate Capshaw.  Victoria has been a  featured guest on dozens of radio, television shows and print media including; the Atlanta PARADE magazine, The Atlanta Business Journal, ABC Talk Radio; CNBC; BUSINESS WEEK Online; INTERNATIONAL HERALD TRIBUNE, WIRED NEWS and THE NEW YORK TIMES. Victoria is also the President and Founder of MediaQuire.com. Follow on Twitter and Facebook!