It’s no secret, I love to make French Macarons.  If you’ve read my previous posts, you now know the only recipes I use come from the King of French pastry; Pierre Herme’s  fabulous cookbook MACARONS.  Pierre features two different recipes for Chocolate French Macarons; AZUR MACARON (page 120) and INFINITELY CHOCOLATE MACARON (page 62) .  Here’s how I made them.

*NOTE:  Since I shared this recipe, I have explored Francois Payard French Macaron shell recipe and I actually like this best and I highly recommend.  The French Macron shells are smoother and have more sheen, not to mention a nice crunch and chew texture. You can buy his book or google the recipe.  Also, I love his Pumpkin Ganache filling which I make every Thanksgiving!  Explore and enjoy! 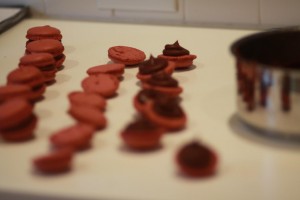 FOR THE MACARON SHELLS

Bring the water and sugar to a boil at 245 F.  When the syrup reaches about 200 degrees F, start whisking the second portion of egg whites to soft peaks.  Once you reach the 245 degrees F start carefully pouring the hot syrup into the egg whites.  Whisk and allow the meringue to cool down, then fold into the almond sugar mixture. * Fold in the melted chocolate.

Spoon the batter into a piping bag fitted with a plain nozzle.  Pipe rounds of batter about 3.5 cm in diameter, spacing them 2 cm apart on baking trays lined with baking parchment.  Rap the trays on the surface to remove air.  Leave shells to stand for at least 30 minutes until they form a skin.

Bring the cream to a boil and then pour the cream over the chopped chocolate, stir and add the juice.  Gradually add the butter that has been cut into pieces – stir to obtain a smooth ganache. (the recipe calls to melt the chocolate first, I did not and it came out perfect).  Pour into a gratin dish, cover with plastic wrap – chill to thicken.

Spoon ganache into a piping bag with a plain nozzle.  Pipe a generous mound on to half the shells and top with remaining shells.

Store the macarons in the refrigerator for 24 hours and then bring them back out 2 hours before serving.  Believe me, they taste their best once they’ve been aged overnight.

My version of Pierre Herme chocolate french macarons came out nice.  I, along with friends thought the chocolate ganache was outstanding.   I hope your version of this recipe is equally delicious.  Enjoy! 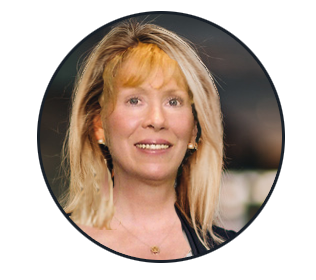 Formerly known as the “corporate psychic”, Victoria lynn Weston has consulted with Fortune 500 executives, entrepreneurs, professionals from around the globe for more than 20 years. She offers an invaluable “intuitive perspective” with predictive elements to help her clients in the decision making process. Learn more!

Victoria is also a producer and developer of VOICE platforms to help brands, business owners, professionals to engage their audience on Amazon Alexa! StudioCarlton.com