Understanding the Psychic Reading: What is Free Will?

FREE WILL & THE FUTURE – chapter excerpt from: Selecting Your Psychic from Main Street to Wall Street

How does information come from the future? What happens when a psychic sees into the future which has not yet transpired?

Let us turn to the interesting aspects of the Theory of Relativity.

One of the consequences which Einstein and others clearly saw is that the past, present and future are laid out in a continuum. They are a single thread of still existing, currently existing, and pre-existing states of affairs. The limitations of our own consciousness prevents the average person from seeing too far ahead or too far into the past.

But the future is already there! This means that a psychic who sees you changing jobs in a year is not projecting something into nothing – a real event into non-existent space-time. Rather, he or she is using an expanding perspective to see farther into a domain where your job change has already taken place. This of course, raises important questions about the activity of free will.

The Future is Ours to Create!

What is Free Will?

Nothing is more frustrating than to have a psychic, whom you know and trust, give you a strong reading about an event in your future and, when it fails to occur in the predicted manner, invoke the action of your free will. What he or she saw was not necessarily destined to happen, rather it was a strong probability. Probabilities can always turn out otherwise. There is by no means universal agreement on this matter.

First, if a psychic correctly sees you pursuing a certain course of action which you carry out, does this in some sense rob you of your freedom? Second, if you don’t do what the reader sees you doing, how are we to explain the mistaken prediction?

Most people in the psychic communities insist that each of us has freedom of choice.

Yet, this is not exactly clear.

What then is free will? There are fundamentally two, and only two, distinct senses of freedom evident in the history of civilization. All others are reduced to variations of them. The first type we will call Contracausal Freedom. To be free in this sense means that one “could have done otherwise under the same conditions.” Thus, if you were able to relive your life to a certain point exactly as it was in every aspect, contracausal freedom stipulates that you could still have chosen to be a physician, as opposed to the pilot you are now.

In other words, contracasusal freedom means that, regardless of your past heredity or conditioning, you can always transcend it. You may have to do some things, but you do not have to do everything you do. Our use of praise and blame logically presupposes that a person didn’t have to pursue a certain course of action, and could have done otherwise. Feelings of remorse and regret also assume that, what occurred, did not have to occur, at least at that time or in that way. Contracausal freedom stands in opposition to a rigidly determined universe where every event causally necessitates another.

The other type of freedom we will label Contextual. Defenders of this variety see no incompatibility between Contextual Freedom and strict universal causality or conditioning. For them, free acts are those which are neither compelled nor constrained. That is, if no one forces you to go to a certain movie, if you decide to see it at a certain time, and finally, nothing keeps you from doing so, then attending the film is a free act. With contextual freedom we are not concerned with the many different ways you many have been conditioned to be the person you are. Nor are we concerned with whether or not you could have chosen otherwise. We are interested in what you choose to do and whether anyone forced you into something you did not wish to do.

Obviously, contextual freedom is a matter of degree. Everybody has some of it, depending upon their circumstances. The quest for political, economic, or religious freedom, for example, is basically a quest for a greater degree of contextual freedom in a particular area. The fact is, everyone relies upon both senses of freedom, the contracusal and the contextual, in daily living. Yet it is the contextual type of freedom that most in the psychic communities appear to rely on. It might be argued, independent of this discussion, that belief in contracausal freedom has no basis in fact.

Regardless of what you choose, there had to be some reasons for causes for your decision.

No decision to act can spring from nothing.

When a psychic affirms your freedom, he or she means one of two things: (1) You are not being forced into a certain course of events which he or she sees; (2) Nothing, including that vision, is constraining your desire or decision to move in a certain direction. It is your choice to make. This is not to say you could have done otherwise under identical circumstances. It is to say that your decision reflects your interests, needs and critical reflection.

Read the entire chapter – available for digital download from Amazon 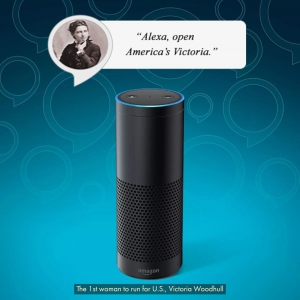 America’s Victoria features over forty audio clips from the documentary which includes interviews with Gloria Steinem, respected historians and actress Kate Capshaw delivered in bite-size audio clips for users to explore Victoria Woodhull’s themes during her lifetime – she was the first woman to run for US President in 1872 – her poverty stricken childhood, politics, her publishing success, hard times, and her final days in England – to showcase this documentary into a digital, user friendly, voice-activated, entertainment platform.

Enable for free on Amazon