Home/365 Days of Psychic Wit, Selecting Your Psychic/Unleash Your Intuitive Genius
Previous Next

It’s no surprise to know that for years,  corporate executives of such companies as Microsoft, Arby’s, Turner/CNN have used intuitive development exercises that have been labeled “brain aerobics”  to harness creative, intuitive and inspired leadership skills.

At the Newark College of Engineering, two professors compiled impressive statistics on the relationship of ESP and executive ability.  They studied managers who seemed able to make the right decisions intuitively, even when those decisions flew in the face of established principles and current data. They spent ten years testing the precognitive abilities of 5,000 such executives.

In one study, the professors interviewed company presidents who had doubled their firm’s profits over five years.  These individuals scored significantly higher on standardized tests for precognition.  In fact, scores on these tests tended to be a better predictor of executive success rather than the standard personality tests that companies use.  Approximately 80 percent of these executives believed in the legitimacy of ESP, not because of anything they had read or seen. They believed in ESP because it worked in their own lives. 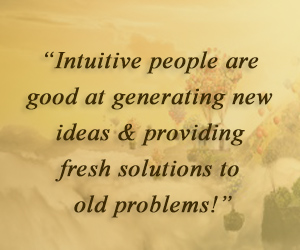 Corporate executives are discovering that analyzing a problem is not enough.  This is particularly true for people who work  under pressure, are up against deadlines and confronted with challenges day after day.  Intuition can provide an answer when there are few facts, limited time, no precedent and several alternatives.

Sometimes we experience intuitive urgings, but often we don’t listen to them. How many times have you made the wrong decision, only to chastise yourself? “Why did I do that?” you mutter to yourself. “Something told me not to. Next time I’ll pay attention.” The next time you repeat the pattern, ask yourself why you never pay attention to that inner voice.

In the “The Intuitive Manager,” author Roy Rowan describes intuition as the “Eureka Factor,” that sudden illumination — “I have found it!” — flash.  When we experience it, we ask ourselves, “What was that?” Intuition is like the elusive butterfly — one minute within our grasp, the next gone with the wind.

Everyone possesses varying degrees of intuitive ability.  It has been suggested that women are more intuitive than men. Why?  Research studies suggest women process information fast than men; they are better at understanding non-verbal communication, and are more sensitive to slight variations in color.  Men, however, tend to score higher on visualization tests — working with maps, three dimensional objects and mathematical reasoning.

Intuition is a “feeling”. It tells us “go” or “don’t go.” Imagine a situation where you suddenly find yourself reacting without conscious thought or effort.  For instance, you decide to take an alternate route home from work. Later, you discover you avoided a ten-car pile up, which could have left you stranded in traffic.  Or, jokingly you ask a friend if he has been promoted to vice president of the bank yet.  A week later he calls to tell you about his new position as vice president.

Many of us don’t know how to tap into our intuitive abilities, primarily because we are members of a society that been taught to use only fact and logic for decision-making. This is changing. Corporation, in fact, are teaching executives to “pay attention” to those “intuitive” flashes.

Relaxation techniques and mental exercises can help “stretch” the mental faculties and the intuitive mind. Think of them as brain aerobics.

First, clear your mind of all the daily clutter and try not to think about anything. Imagine a blank chalkboards. Relax your body by breathing deeply.  With each inhalation, hold your breath three seconds and exhale slowly, releasing all tension and apprehension.

Visualize a tranquil, inspiring place you would like to be at this moment.  Consider, for example, a glen in the woods over-looking a waterfall, or perhaps a beach near the ocean where you are lying on fine white sand and listening to the natural rhythm of the waves.  This will help bring you to a quiet, meditative state.

Set aside time everyday to practice your relaxation skills, and try to remain patient with your ability to quiet your mind and body.  Meditation gets easier as your ability to recall that quiet state takes over.

The following are additional exercises which you will find stimulating and enjoyable.  It’s not necessary to go through a meditation process to work with them.  Experiment with the exercises, keep a journal and record your experiences.

Once you feel comfortable with your predictions, challenge yourself with more pressing questions:  Is it a good time to ask for a raise? What month would be the right time to put your house on the market? The first answer that comes to mind is likely the accurate one.

Remember, in many instances, some of the answers you receive may or many not appear logical or rational when weighed against the experience. Underlying circumstances can affect the total picture.

With practice, your intuitive abilities will become more natural natural, and you will be able to differentiate between wishful thinking and authentic intuitive impressions.