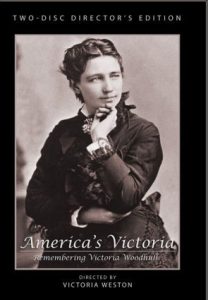 Victoria Woodhull burst onto the stage with America’s most radical reformers, reoriented their movements, and was gone. People listened to her. A congressional committee reported on her interpretation of the Fourteenth and Fifteenth amendments. She was the first woman to run for president of the United States and the first presidential candidate to spend election day in jail. Harriet Beecher Stowe and Catharine Beecher used their cultural leverage to label her a tramp. Anthony Comstock declared war on her for distributing obscene materials. She almost brought an end to Henry Ward Beecher’s career. America’s Victoria is a biography of this enigmatic figure in American history, the daughter of a swindling father and a spiritualist mother, who remade herself several times to become a Wall Street broker, a radical reformer, and, with her third husband, a British lady of the manor. The story is told by a narrator, several commentators, and readings from Woodhull’s speeches and contemporary documents.

“I am a prophetess, I am an evangel, I am a Savior, if you could but see it; but I, too, come not to bring peace but a sword.” – Victoria Woodhull

Buy the Director’s Cut of America’s Victoria on Amazon

“Victoria Woodhull was a fascinating woman, way ahead of her time, an advocate not only of women’s suffrage but of legalized prostitution, equality in marriage, and free love, by which she meant a commitment untrammeled by governmental regulations. She ran for president four times and generally lived a life unimagined by most women (and men) of her day. She is described as electrifying, larger than life, and flamboyant. Interviews with Gloria Steinem, Ellen Dubois (a UCLA historian), and others are filled with enthusiasm and admiration”. Recommended for Women’s Studies collections. – —Library Journal

“If you spliced the genes of Hillary Clinton, Madonna, Heidi Fleiss and Margaret Thatcher, you might have someone like Victoria Woodhull. – Steve Murray, Journalist

Buy the Director’s Cut of America’s Victoria on Amazon

This is a fine documentary about a fascinating and little-known American, the first woman to run for President.

Every school and college library should have this excellent DVD.

This film/video presents it all wonderfully.

This is a long overdue documentary about Victoria Woodhull. The interviews are engaging, serious and captivating

About the Director, Victoria lynn Weston